I would like to give the opinion of a Russian officer here. The notification was posted on You Tube on February 4th. The officer tells Putin what he thinks:

Putin go home to your son and wife. You have been in power for almost 20 years. You won’t let anyone breathe. You are poisoning the senses of our soldiers. The Ukrainian brothers are our brothers. If you kill a Ukrainian who is the next – Belarusians, and then who- the Tatars. You want the whole of Russia to be destroyed. All graveyards are filled with young men. All soldiers know the truth, no one says anything, everyone is silent. Your ratings will only rise until to the war. You’re organise these wars all the time. The ware in Caucasus, although in Chechnya, then who still knows where – in Abkhazia. Don’t you no boring killing our soldiers. I became a colonel on the front. After that videos I know my life may not be going well. It’ s OK. I already lived in the world. I just want to know – will you let be alive some real men in Russia?. I’m the Russian men. I respect my Russian friends, the Tatars and Pashkirs are my brothers.  …. the graveyards are filled and  go and looc how many young men are lying there. Only the dead bodies are there. Go home to your wife. Enough! 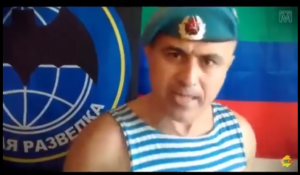 If you remember from the Bible, then it was the people who had crucified Jesus. The people said to the Romans “Crucify him.” Please do not make such a choice. If we all say no (because we don’t want war), governments have no way to fight. Soldier, please! Are you with us or fightig against the people and let yourself kill for nothing!

Peoples, wake up! Don’t let your sons and fathers be killed. The boys of the Baltics, also fought in Afghanistan during the Soviet era. They were sent to fight there by Russian Covernment and they died for nothing. The young men were sent home in a tin coffin and their mothers were told that a boy’s brain tumor had developed and the tin coffin was not allowed to be opened. The soldier who had been sent to serve in the Soviet Union had no choice. We have. Let’s not be scared. Russia now used Chechnya against the Ukrainians in this war with Ukraine. Chechens who fought not so long ago for their independence and against Russian occupation. Really, who are next: Belarusians, Tatar. In August 1920, the Poles saved Estonian country from the Russia by stopping the Red Army’s invasion of Europe under Warsav. The “Miracle of Wisła” (Cud nad Wisłą) saved us and at that time gave Estonian the opportunity to live peacefully for almost 20 years, to build own country. Without it, they would not have the own country.  Let’s help Ukraine! Let us not allow the world to fight!

Sons of Russia to not go in senseless war! People all over the world – don’t let it happend. We all have our skeletons in the closet.  We are destroying nature, for example, and killing animals. None of us is sinless. This is also the problem for countries -they no sinless. But we all know what love is. What is happening in Ukraine is not love. Let us not be afraid to defend democracy.